Belal didn’t actually work in the restaurant he coaxed us in to.  He’d been watching as we wandered slowly through the town square, gazing non-committedly at menus.  We’d been looking for our first Moroccan meal and an escape from the 40 degree heat that was beating down on Chefchaouen, a small village tucked in the Rif Mountains of northern Morocco.  Suddenly standing up from a table, Belal invited us to sit down, waving his arm backwards, putting the restaurant on display.  Seeing doubt on our faces, he turned to pick up a menu and assured us of the great range available – tagines, kebabs, fruit juices…”anything you want!”.  We didn’t need much convincing.  All the restaurants looked much the same and this guy had made a non-aggressive effort to talk to us.  We sat down.

We scanned the menu.  “Do you have hummus?”, we asked, sure that hummus and bread would be q 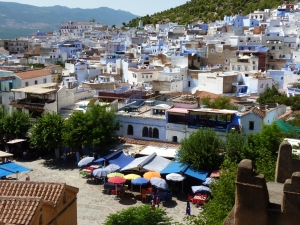 uite the typical start to our Moroccan adventure.  Belal looked at us blankly.  “Hummus?” I repeated.  He turned and shouted to the kitchen.  The owner came out.  This was serious.  “Yeah, yeah”, the owner assured us after more to-ing and fro-ing.  “And a tagine?” I requested.  He looked pained.  “Mmmm.  A tagine would take too long to make”, he apologised.  Right.  We’d arrived in the middle of Ramadan and the only people sitting in the surrounding restaurants were fellow tourists.  The place was mostly empty for a reason and food hadn’t been pre-prepared.  We asked what our options actually were and the owner shouted down to the kitchen, with Belal standing nervously by, his narrow frame moving from one foot to another.

When our food was finally presented, it was clear that, despite originally being told that we couldn’t actually have just anything from the menu, we had over-ordered.  Meat kebabs, salad, chips, vegetable mixes, couscous.  And chickpeas.  No hummus.  Something had clearly got lost in translation, but it didn’t matter.  The food looked fantastic.

It should have been too hot for this much food, but we devoured it.  Our journey to this table had begun at 4.30am that morning, with a questionable car share ride from Seville to Tarifa, on Spain’s southern coast; a ferry crossing; a two-hour taxi journey along windy roads with a driver who was clearly low in energy (now for obvious reasons) and 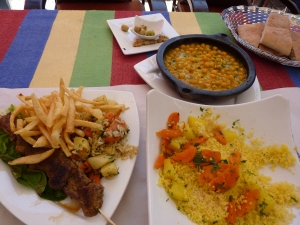 who was at his most animated when explaining the massive hashish cultivation in the area; and then getting lost in Chefchaouen while looking like turtles with our two backpacks each.  We needed the food.

As we tucked in, Belal never went far.  He took a seat at a table across from us in the small, colourful restaurant where most of the tables were out front, under a large awning.

“Where are you from?”, he asked.  “Is your food ok?”.  He felt like chatting.  We replied politely in between mouthfuls.  He stood up, wandered around, returned.  “You know, I don’t actually work here,” he confessed.  This explained the initial confusion over the menu.  He had just been hanging out, helping his neighbour in the restaurant.  After further pleasantries, and me feeling awkward that we hadn’t invited him to join us, he asked if we would like to spend the afternoon with him.  “I could show you some nice places in my town”, he assured us.

We’d heard about guides in Morocco, both official and fake, but figured why not.  He was a nice guy and a local is always good to have around.  He beamed.  “You’ll have to pay me, you know,” he added quickly.  “But of course!”.  Nothing is free.  “No, no, no, it’s just a joke!”, he laughed.  “I’m not a guide, we can just hang out”.  His voice was gentle, his manner polite.  He was somewhat cautious, but liked a joke.

So it was, with full bellies we set off to explore the small medina of Chefchaouen, where the white stone houses are washed with blue paint and where no cars are allowed (or physically able) to enter.

A two-hour drive from the port town of Tangier, Chefchaouen is a gentle introduction to Morocco for the uncertain tourist.  The old medina – a walled section of a city that contains many narrow and maze-like streets – is the main attraction for tourists and is clean, small and inhabited by very friendly people, many of whom speak some Spanish and English.  Chefchaouen, founded in 1471 as a small fortress to fight Portuguese invasions of northern Morocco, was seized by the Spanish in 1920.  It is now a humble little city, with a population of nearly 36,000, and is a lovely place for relaxing, getting lost in cute streets and browsing many of the products typically produced in Morocco, such as leather, carpets, clothing and spices.

As we strolled slowly through Chefchaouen’s cobblestoned streets, admiring scarves, bags, fruit, and continuously taking photos, Belal began to open up and to describe life as a 22-year-old from a northern village in Morocco.

Belal is smart – he taught himself to speak English by watching TV – and is one of only a few of his friends to have left Chefchaouen to study.  He is partway through a maths degree in a city nearby, but wants to quit.  “It’s hard”, he stated.  He doesn’t like the course and “what’s the point anyway?”, when, after dedicating years of his life to study, job opportunities, when he graduates, will be scarce.  He has considered returning to Chefchaouen permanently and would actually like to be a math teacher there.

Belal doesn’t have many friends in town, now that he studies elsewhere, although, having recently found himself a girlfriend, Salma, he will probably now find more reasons to be at home.  Belal spends time with his neighbour in the restaurant, or at home with his numerous family – sisters Fatima (16), Zaynab (5 months), and brothers Mohamed (25), Imad (8) and Moad (6).

Moving around town, we had already noticed a number of men hanging out, and watching the world go slowly by.  But the women seemed to either be working in a shop or going somewhere, inevitably carrying heavy items.  We wondered if, and how, the women socialised.  Belal informed us, somewhat defensively, that the women could do what they wanted and that they weren’t oppressed in the way Westerners often believed.  Besides looking after her many children, his mother enjoyed getting together with friends at home to share a cup of tea and gossip, while her husband worked in his own restaurant, out of the medina.  She also chose to wear the traditional headscarf, and Belal believed that women did so because it made them feel more comfortable. 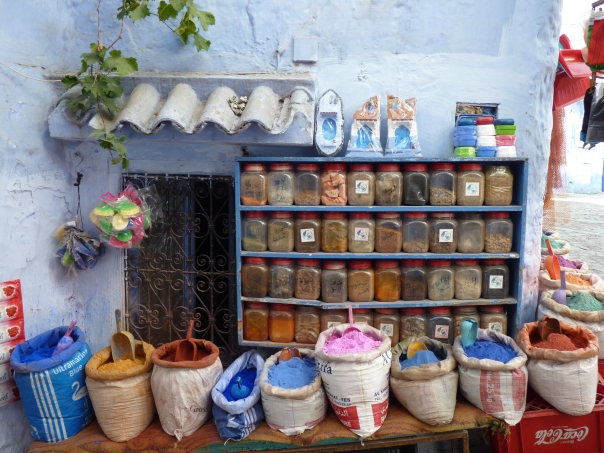 Our path took us to the local waterfall and swimming hole, which was noticeably bereft of women and girls.  Boys jumped from rocks into what appeared to be an impossibly shallow pool, while others looked on and cheered, played football or sunbathed on the communal washhouse roof.  We refilled our drink bottles from a naturally-fed fountain and moved past the crowd shyly – was it ok that we were here?  Belal encouraged us on, and we soon found ourselves barefoot in the river downstream, the hems of our long skirts trailing behind us.  The fresh mountain water was a blissful relief from the intense heat of the afternoon.

Our extensive travel experience would have seemed incomprehensible to Belal, who had only travelled to a couple of other cities within Morocco.  He looked forward to an upcoming trip to the beach-side town of Martil with his family, but couldn’t begin to consider travelling further afield.

We passed by a small bakery, a cold, dark room in a concrete house.  We remembered having watched a couple of times, as a traditional flat bread roll had fallen off a bread cart that rumbled along the road, and as the baker had simply put it back on top.  There are some things you’d rather not know.

A small turn from the main plaza of Chefchaouen, Belal took us to a cafe and ordered us a fruit smoothie which he promised would be amazing.  We skipped up the stairs to a beautiful terrace bar, softly lit, with Chefchaouen village laid out below.  It was incomprehensible that there wasn’t another tourist in sight; this place was amazing.  Our juices arrived and they were delicious as promised.  Thick and sweet with an avocado base, we didn’t need anything else for dinner.  But wait.  “Belal, what about yours?”.  He refused to let us buy him anything.  A kind but stubborn young man!

We commented that we had seen various female tourists walking around town in short shorts and singlets and thought that, from what we had read, this was evidence of a lack of interest in respecting cultural beliefs.  Had they not read their Lonely Planet??!  “I mean, what do you think about my clothes?”, I asked.  “They’re ok, right?”.  He refused to look me in the eye.  Awkward.  “The bottom part is ok”, he said slowly, referring to my long, flowing skirt that showed no hint of my curves and only showed my ankles when I lifted it to avoid tripping up stairs.  “But the top part…”. Oh.  I’d been sweating all day and would have loved to have jumped into that river in my bikini, but it still wasn’t good enough.  My t-shirt was low-cut and too tight.  Curves.  I apologised and assured him I’d done the best I could so far.  “But it doesn’t even matter!”, he exclaimed, noting that I had the right to dress how I wanted, as did the girls in their short shorts.  I hadn’t expected him to say this but wondered if this opinion was not one held by everyone in the town.

The 1500 calorie fruit smoothies consumed, we insisted that Belal let us buy him a glass of the typical, very sweet, Moroccan mint tea.  We brushed off his protestations, noting that at home we bought our friends drinks and intended to do the same for him, a new friend.  The beautifully decorated cafe near the town square was, this time, bereft of locals.  Belal almost seemed out of place, but taught us how to hold the hot glass with a finger on the bottom and another on the top rim to avoid burning our fingers.

That night, we went to bed in our small riad – a former home turned guest house – richer for having spent the day with Belal.  We’d taken a chance, accepting his invitation for a walk and had come out much more knowledgeable about daily life for a young Moroccan man.  Instead of ticking photo opportunities off a list, we discovered that there is more to Morocco than we’d thought and that beliefs here are diverse.  As Belal’s younger generation moves through more change will likely emerge.  This will be resisted by some, but probably seen as inevitable by most. 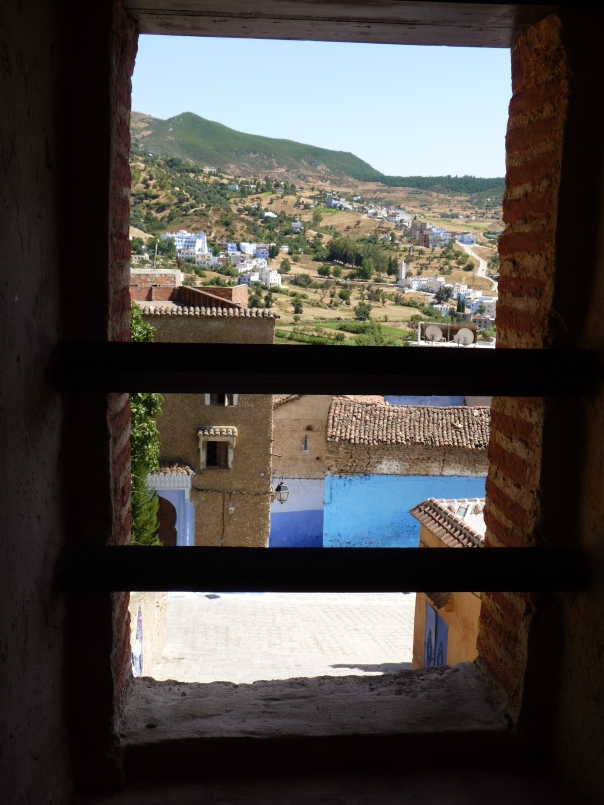 I am passionate about travel, CrossFit and writing and have combined all three in my blog - boxjumping. A Level 1 certified CrossFit trainer, I am visiting as many CrossFit boxes as I can during my travels. This has opened many doors - I´ve been to random parts of cities, met awesome people and seen the myriad of ways a CrossFit box can be run. I also CouchSurf - another awesome way to meet locals and end up in areas you never expected. I like hidden corners, local flavours, sitting in a cosy café with my journal, lying on a hot beach with a book. I like flexibility. I like freedom. I like learning about myself, other people, about the world. Life is a journey, they say, but it is also short and full of the unexpected. I am making the most of mine.
View all posts by Josinta »